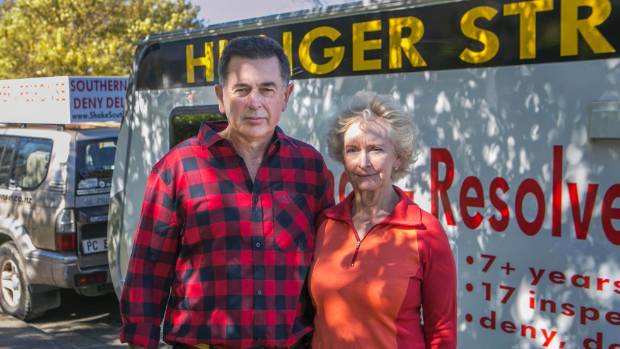 A Christchurch man is feeling weak and suffering constant stomach pains on the sixth day of his hunger strike, but is determined to “go the full distance” with the stand over his Southern Response insurance claim.

Peter Glasson has not eaten since midnight on Monday last week and has vowed not to break the hunger strike until Southern Response settles his insurance claim.

He issued a statement through a PR company on Sunday, saying he felt “no less resolve than when I started”.

“I am losing around 1 kilogram a day and feeling pretty weak but I will continue for as long as it takes. My determination is as strong now as it was when I started,” he said.

“I have received massive public support and wish to thank everyone for that. I have been saddened by all the similar stories I have heard from other people during my hunger strike but it is your encouragement and kind words that are helping me to keep going.”

He said Greater Christchurch Regeneration Minister Megan Woods had asked for his case to be referred to the Residential Advisory Service, a body that helps Cantabrians settle insurance claims on earthquake-damaged homes.

“We signed an agreement to undertake that alternative process [on Friday],” Glasson said.

“We want our insurance claim settled quickly and fairly. The High Court process is very slow and it will mean we are stuck in court until another year from now.”

The Christchurch man and his wife, Anne, are among hundreds of homeowners with earthquake-related claims that are still unresolved with the insurer, seven years on from the Canterbury earthquakes.

Since launching legal proceedings against Southern Response two years ago, Glasson has been spied on by the agency, sign-written an anti-insurance car in protest and has countless documents detailing his battle.

He has been drinking water, green tea and 1.5 litres of electrolytes every day. He also takes a multivitamin tablet.

“We didn’t see any other option. I am determined to go the full distance if required and we all know the final result of hunger strikes,” he said.

“They [Southern Response] are calling my bluff at the moment and have been doing that for several weeks. They need to know I am serious.”

Southern Response chief executive Anthony Honeybone said earlier that the insurer “remains sympathetic” to the Glassons’ situation and had offered to meet with them once they had what they needed from the additional property visit.

“We would also be open to another mediation with the Glassons rather than waiting for a court date later this year.”

Glasson said his online research indicated it can take anything between 20 to 60 days to die on a hunger strike.

“I don’t carry much weight.”